Week 38 of Your Pregnancy

In the 38th week of pregnancy, you are in the last month of your pregnancy. The calculated date of birth is still two weeks away.

But as we all know, nature doesn’t necessarily stick to human calculations – and so on, or the other baby is already being born now. Since all vital organs are functioning, your baby is basically ready for birth and is no longer considered a premature baby.

Here you can find all of our 3rd trimester articles:

The baby at 38 weeks gestation

At 38 weeks of pregnancy, the baby measures about 19 ½ inches in length, and its weight is 6 ¾ pounds. This means it has reached its regular birth weight.

If the birth is still a few days away, it uses this time to build up more resources. In reality, however, the weight of children develops very differently. At birth, it averages between 5.9 and 8.4 lbs; boys are usually somewhat heavier. In the past few weeks, the baby’s brain and skull have undergone another growth spurt. Its head circumference is now about 12.5″ – the cervix will also widen to this size during the opening contractions.

Organ functions and reflexes are fully developed. The baby’s lungs are the last organ in the body for which nature has provided some “finishing touches.”

In the 38th week of gestation, they begin to produce cortisone, which ensures that the lungs can expand easily when the baby takes his first breath. After birth, it usually takes a few more hours for the breathing rhythm to settle. During the weekly check-up in the 38th week of gestation, the doctor will pay particular attention to whether the placenta is still fully fulfilling its supply function and whether there is enough amniotic fluid. If there are any abnormalities, very close observation will be prescribed. It is also possible that the birth will be induced artificially to avoid complications.

If bright red discharge comes out of the vagina, this may indicate placental abruption, which is a medical emergency. However, it can also be a completely harmless physiological drawing bleeding, which occurs when the cervix opens.

Relate: Third Trimester of Pregnancy: What to Expect

The mother – countdown to the birthdate

For the mother, this week is the countdown to the birth. When does it start? And how will the start of the birth be felt? It is good if she can still use the time until then for relaxation and small everyday pleasures. The partner should also take a step back in his daily routine. Soon he will be fully challenged by his role as a father.

Relate: What to pack in hospital bag for dad

Especially, women who are expecting their first child are often plagued by insecurity during these days and feel nervous and tense. It is possible that the approaching birth is already making itself felt. About a week before, the previously very continuous weight gain also stops, and some women even lose some weight now. In the last few days before the birth, light diarrhea sometimes appears.

Unmarried couples can already register the recognition of paternity.

What happens during a cesarean section?

If a C-section is planned for medical reasons, it is usually scheduled for the 38th week in order to anticipate the onset of labor. However, this point is controversial among obstetricians: many doctors today recommend waiting until the onset of labor to do this – natural birth also releases happiness hormones. However, if the baby is transverse or placenta praevia totalis, it is important that the C-section be performed before natural labor begins.

Most cesarean sections are performed with a regional anesthetic (epidural or spinal). This allows the mother to hold her baby in her arms immediately after birth.

If she wishes, she can also see the baby being lifted out of her abdomen during the operation. In the case of a planned cesarean section, the presence of the partner is also not a problem; the only exclusion criteria are a true emergency cesarean section or general anesthesia.

Before a planned cesarean section, a clinic appointment is scheduled for a detailed examination of the mother and baby.

Then, the mother comes to the hospital either the night before surgery or about three hours before. Eight hours before the time of surgery, eating is no longer allowed, and six hours before that, drinking is also not allowed. The C-section itself consists of a thin horizontal incision above the pubic bone and a second incision in the lower part of the uterus. After the baby is lifted out, the upper and lower layers of skin and muscle are each sutured separately. If there are no further complications, mother and child already enjoy their first moments together during this time.

Today, the trend is toward a so-called “gentle cesarean section” (Misgav-Ladach procedure), in which the uterus is not cut open, but is prepared to pull the baby out by stretching and tearing. This method does not require deep suturing, heals faster, and is less stressful for the mother.

The four stages of natural childbirth

Natural childbirth is a process that occurs in three distinct stages:

The first stage is about opening the birth canal. At its end, the cervix has dilated to a diameter of about ten centimeters. The cervix is now shortened and much softer. This process begins even before the first contractions. A visible signal of this is the so-called drawing, which indicates that the mucus plug in front of the cervix has loosened. In women who already have children, the first opening contractions often follow immediately.

In labor, each woman has her own pace and rhythm. As early labor enters its active phase, it becomes more frequent, more painful and lasts longer. It may still take several hours for the cervix to fully dilate.

The transition phase begins when the cervix has dilated to about eight centimeters and ends when it is completely open or when the woman feels the need to push. At this stage, the frequency of contractions decreases, but the single contraction is stronger and lasts longer. The rupture of the membranes often occurs at this stage.

This stage is the most difficult phase of childbirth. Many women now vacillate between anger, pain, and fatigue. Concentrating on breathing helps to endure the pain attacks. If the birthing woman reaches her limits in this process, homeopathic remedies, acupuncture, pain-relieving medications (meptid, pethidine) or – in the case of very severe pain – epidural anesthesia bring relief.

In the expulsion phase, the mother pushes her baby through the birth canal. With each pushing contraction, the baby advances a little in it. The mother feels the need to push as a strong physical desire. When the head stops receding into the vagina between contractions, obstetricians will ask the mother to stop pushing but to pant during the following contractions to deliver the baby gently and slowly.

For women who already have children, this stage often lasts no longer than five to ten minutes, and for first-time mothers, it can sometimes last several hours. However, the expulsion stage should not last longer than two hours, even for the first child. An upright position can support the birth in this phase.

The birth of the child is followed by afterbirth. The contractions have now weakened considerably and ensured that the placenta and the egg membranes are also expelled. After that, the uterus contracts strongly to stop bleeding. When the mother first lays the baby down to the nurse, hormones are expelled that promote the detachment of the placenta. In many hospitals, the mother also receives an injection for this, which eliminates the need to push for the afterbirth.

Your checklist for the 38th week of pregnancy

✅ Why is my belly hard at 38 weeks pregnant?

If you’re in your second or third trimester of pregnancy, and you notice that sometimes your pregnant belly gets very hard, feels tight, and even causes mild discomfort, you’re probably experiencing Braxton-Hicks contractions.

✅ What is baby doing at 38 weeks pregnant?

At 38 weeks pregnant, your baby is nearing full term and complete maturity. You may literally be breathing a little easier than baby moves lower into your pelvis, reducing upper abdominal pressure. That said, just getting up to get a glass of water may feel like a chore.

What to Expect During Your 38th Week of Pregnancy - Video 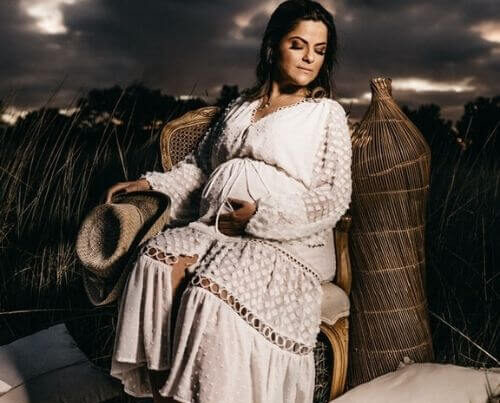 Thirty-ninth Week of Pregnancy: What to Expect