Twentieth Week of Pregnancy: What to Expect

Week 20 of Your Pregnancy

You are halfway through the pregnancy. By now, you are probably already feeling the baby’s movements. The baby is growing and needs more and more space, which can be accompanied by abdominal pain or backache.

Your baby gets soft, white fuzz and small gray cells in the 20th week. The senses, especially brain and taste cells, are now developing rapidly. You yourself are probably doing pretty well right now.

Enjoy the time – and read here why it’s a good idea to pack your travel suitcase in the 20th week.

The development of your baby in the 20th week of pregnancy

Congratulations! You are now 20 weeks pregnant and have reached the halfway point! At this 20th week of gestation, your little one is now completely covered by a creamy layer of sebum called Vernix caseosa. It wraps around your baby like a second skin, shielding him or her from the amniotic fluid like a little wetsuit. This substance, also known as cheese goo, also protects your baby from bacteria in the womb and acts as a kind of external immune system. During the birth itself, it acts as a lubricant, making the birthing process easier. Afterward, the cheese goo protects your newborn from heat loss. Gradually, it then absorbs into the skin by itself or dries out. These dry hard flakes should then be removed very carefully from the folds of skin the next day, otherwise, they could cause sores due to the baby’s movements.

In the 20th week of gestation, your baby’s head sprouts. And this time it is not just fluff, but real hair. The bones of the inner ear are now fully formed, and the nose is developing its unmistakable shape, which can be seen beautifully on the ultrasound from this 20th week. The eyes have finally taken their final position on the head since the previous week.

Quite independently of the hair, small sebaceous glands form in the area of the glans or the labia minora in the 20th week of pregnancy. In girls, the clitoris is formed quite large in relation to the rest of the small body and is therefore easily recognizable. Whether you know the sex of your little treasure or not, it is always a particularly nice task for parents to think about a possible name for their joint child. Let our name generator inspire you in this regard.

In recent times, your baby’s brain has been working non-stop to develop the nerve centers that control his senses. These are now working better and better. That is why in the 20th week of pregnancy your little one already reacts to your activities, sounds from outside, and even to the taste of the amniotic fluid.

20th week: What is the fundal level?

At every checkup, your gynecologist or midwife will feel the fundus level – the upper curved part of the uterus. In the past, it was considered the most important indicator of pregnancy. Today, it is still a good indicator for your midwife and gynecologist whether everything is going well.

Where is the baby lying?

Now it is still below the belly button. Exactly how and where the baby lies will only become important in the last few weeks before birth. The position of the baby will help decide whether a spontaneous birth or a C-section makes more sense in your case.

Your body at 20 weeks of pregnancy

The size of your uterus has tripled by your 20th week of pregnancy. At your next checkup, your doctor may notice that the fundus is now at the level of your navel.

From now on, your uterus will continue to grow about one centimeter each week until the time of delivery. This will also be reflected in your weight gain.

An ultrasound scan will allow your doctor to check the baby’s growth and development, set your due date, check the fetus for any developmental delays, and make sure everything is okay with both the placenta and the umbilical cord. Whether you want to know the sex of your child already or not, a look inside the uterus makes the fact that you will soon be parents become more and more real in the 20th week of pregnancy.

Now is actually also the perfect time to start thinking about a baby shower. Usually, this is organized by your best friend or a close relative. A baby shower before birth will allow you to experience beautiful moments with your girlfriends once again in peace. Don’t wait too long, because the further your pregnancy progresses, the more you will have to struggle with possible weight gain. The period from the 20th to the 30th week of pregnancy is optimal for this. Let our baby shower checklist help you in this endeavor.

20 weeks of pregnancy: Your symptoms

What helps against back pain?

20 weeks of pregnancy: This is what you should pay attention to 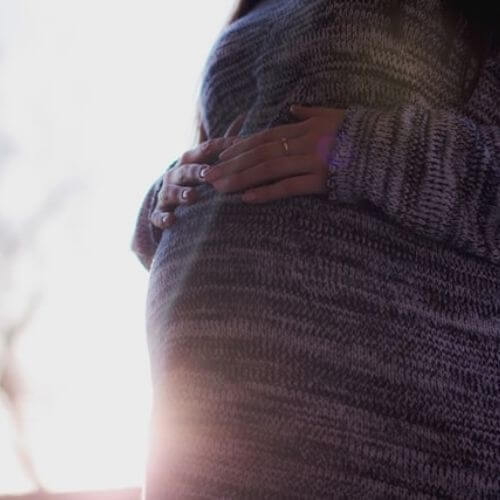 Your checklist for the 20th week

✅ Is a baby viable at 20 weeks gestation?

According to statistics, the limit for the viability of a premature baby is between the 23rd and 25th week of pregnancy. Babies born before then, regardless of their state of maturity, unfortunately, have little chance of survival.

✅ Where is the uterus located in the 20th week?

In the 20th week, the uterus grows upward. Its upper edge, the so-called fundus, is now perceptibly at about the level of the belly button – an intermediate stop, because in the coming weeks and months it will move up to the breastbone.